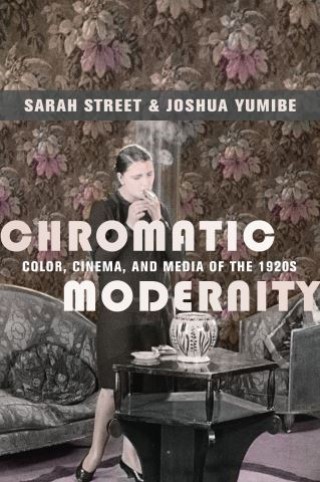 The era of silent film, long seen as black and white, has been revealed in recent scholarship as bursting with color. Yet the 1920s remain thought of as a transitional decade between early cinema and the rise of Technicolor—despite the fact that new color technologies used in film, advertising, fashion, and industry reshaped cinema and consumer culture. In Chromatic Modernity, Sarah Street and Joshua Yumibe provide a revelatory history of how the use of color in film during the 1920s played a key role in creating a chromatically vibrant culture.

Focusing on the final decade of silent film, Street and Yumibe portray the 1920s as a pivotal and profoundly chromatic period of cosmopolitan exchange, collaboration, and experimentation in and around cinema. Chromatic Modernity explores contemporary debates over color’s artistic, scientific, philosophical, and educational significance. It examines a wide range of European and American films, including Opus 1 (1921), L’Inhumaine (1923), Die Nibelungen (1924), The Phantom of the Opera (1925), The Lodger (1927), Napoléon (1927), and Dracula (1932). A comprehensive, comparative study that situates film among developments in art, color science, and industry, Chromatic Modernity reveals the role of color cinema in forging new ways of looking at and experiencing the modern world.